This expedition will bring a wonderful insight into Bhutan as you get escorted through western Bhutan Paro, Thimphu, Punakha and Wangduephodrang, exploring important cultural sites, monuments, unique culture and tradition, people, and villages. The highlight of this tour will visit Punakha Dzong which stands majestically at the junction of the two rivers Pho Chu (Male River) and Mo Chu (Female River

DAY 1: ARRIVR PARO (2280m) & DRIVE TO THIMPHU: 65KM/APPROX 1HRFlight into Paro with Druk Air, Bhutan’s national Airline is spectacular. The flight takes you over the great Himalayas, offering most beautiful scenery of the world’s highest peaks. As you enter Paro valley, you will see the Paro Dzong (fortress) on the hillside overlooking the Paro Chu (river), with Ta Dzong, formerly a watch tower and now National Museum, above it. On arrival you will be greeted by our representative from Yeoong Travels and drive to Thimphu.

The first stop will allow you to view the magnificent Tachocho Lhakhang, the hereditary place of worship for Bhutan’s Iron Bridge Builder and further drive will reach to Chuzom marks by the confluence of Paro Chu (river) and the Wang chu.

Opposite of you, at the confluence, are three protecting chortens each built in a different style. Evening stroll through the market and mingle with the local people and visit shops.
Overnight stay at Hotel, Thimphu.

DAY 2: THIMPHU (2320m)
Today’s exploration of Thimphu begins will take with visit to National Memorial Chorten, a stupa dedicated to world peace and prosperity in 1974 in memory of the Third King of Bhutan; the Kingdom’s rich culture at the National Library; the National Institute of Zorig Chusum where students undergo training course in Bhutan’s thirteen traditional arts and crafts; Folk Heritage Museum which will provide an insight into traditional Bhutanese farm house and rural past through exhibits and documentation of rural life.

After lunch visit Changangkha Lhakhang, a fortress likes temple which lies perched on a ridge above Thimphu; Taken Preserve to see the rare national animal of Bhutan. This animal is chosen as the national animal of Bhutan for its uniqueness and its association with the country’s religious history and mythology. A further drive towards the BBS tower will provide a bird’s eye view of the capital; visit nunnery temple and followed by a visit to Tashichho Dzong or “the fortress of the glorious religion” which is Bhutan’s administration and religious centre and houses the throne room of His Majesty the King of Bhutan, other Government offices. It is also the summer residence of Je Khenpo or Chief Abbot.
Overnight stay at Hotel, Thimphu.

DAY 3: THIMPHU – PUNAKHA (1300m): 77KM/APPROX 2 ½HR
Your journey continues with travels to the east onwards to Punakha through some of the Kingdom’s richest agricultural land and most dramatic river valleys. The first stop will allow you to hike up to Hongtsho Goemba to view the stunning 15th century wall paintings before heading over Dochu La, 3050meters pass, snow-capped eastern Himalayan ranges can be seen on a clear day. Prayer flags will flutter you over the pass deeper into the essence of Bhutan. The beauty is further enhanced by the Druk Wangyal Chorten – 108 stupas built by the eldest Queen Mother. Once you cross the pass, you wind down into a warm fertile valley.

En-route you will stop at Mitsina village and visit Chimi Lhakhang the auspicious fertility monastery dedicated to Divine Madman, you will take 20minutes walk through the rice fields.

After lunch visit Punakha Dzong which stands majestically between the two rivers- Pho Chu and Mo chu. The Dzong is said to be the most beautiful dzong in Bhutan; it is an marvelous structure with intense artwork, and the winter residence of the Je khempo (chief abbot). Also this is the second dzong built in Bhutan by Shubdrung Nawang Namgyel in the year 1637.
Overnight stay at Hotel, Punakha.

DAY 4: PUNAKHA – THIMPHU
Today you will drive north of Punakha Valley following the Mo Chu and we will hike up to Khamsum Yulley Namgyal Chorten, the splendid example of the Bhutanese architecture and art. In the evening we will travel back to Thimphu. Before heading to Thimphu we will drive 30 minutes to Wangdue and briefly visit the Wangduphodrang Dzong, 17th century monument overlooking the typical village of Rinchengang and we will stroll freely in town which is the last town before central Bhutan.

You will also stop over Dochu La pass again for lunch and visit Druk Wangyal Lhakhang the past and future appear to merge in the details tells the story of a supreme warrior figure whose vision pierces the distant future, and visit Semtokaha Dzong the oldest fortress in the Kingdom stands on a lofty ridge in Thimphu.
Overnight stay at Hotel, Thimphu.

DAY 5: THIMPHU
Today you will drive north of the Thimphu for a short hike about an hour to the 17th century Cheri monastery. It serves as a school of higher learning for graduate monks and where they practice inner meditation. It is, also, an important pilgrimage site for Bhutanese Buddhists. After the visit to the monastery, the return walk to the town will be along the ancient route taken by Shabdrung on his journey to Thimphu. Travelling through the countryside, you will enjoy Bhutanese villages and spectacular scenery. The route is dotted with Bhutanese-Tibetan settlements and paddy fields.

A highlight of the hike is the school for the thirteen Bhutanese arts and crafts which is run by a private entrepreneur. You will, also, encounter ancient ruins before you finally come to the road-head at Pangrizampa. On the drive back to the town, you may stop to view the Dechencholing Palace which is the residence of Her Majesty the Queen Mother. You will, also, catch a glimpse of the 4th King’s Palace hidden in the pine forest from the road. You may coincide with playing archery Bhutan’s national game in Changlimithang.
Overnight stay at Hotel, Thimphu.

DAY 6: PARO TIGER’S NEST HIKE
Today’s day will begin driving back to the Paro valley to take on a stunning hike on foot to visit the Taktshang Gompa or Tiger’s Nest viewpoint. Our hike to Taktshang from the road point will take through the well maintained path which is quite uphill and it takes around 3-4 hours at an average walking speed. The trail climbs through beautiful pine forest, many of the trees adorned with Spanish moss, and an occasional grove of fluttering prayer flags. You stop for a rest and light refreshments at the Taktsang cafeteria.

This incredible monastery clings to the edge of a sheer rock cliff that plunges 900 meters into the valley below. Legend has it that Guru Padmasambhava, the tantric mystic who brought Buddhism to Bhutan in 747 AD, flew here on the back of a flying tiger Dorji Drolo, said to be his consort.

You will visit the auspicious Kyichu Lhakhang, a scared monument pinning down the left foot of a treacherous ogress, which is built in 659 A.D by the Tibetan king Srongsen Gampo. This Monastery is one of the 108 monasteries built across the Himalayan region by the Tibetan King to subdue the Demoness that lay across the Himalayan region. The rest of the monasteries lie in other neighboring countries; Drugyel Dzong the imposing fortress which was the strategic vantage point for numerous defeat of invading Tibetan armies and here in clear weather can view the spectacular view of mount Jomolhari 7314m.

In the afternoon drive to the beautiful valley to the watch tower or locally known as Ta-Dzong. The third King Jigme Dorji Wangchuck housed it into the National museum in the 1960s. The seven floor museum highlights various aspects of Bhutanese culture and history dating back to the 7th century. A short walk downhill to the Rinpung Dzong which serves as the administrative center and school for monks, and walk further down crossing the traditional bridge into Paro Town. Overnight stay at Hotel, Paro. 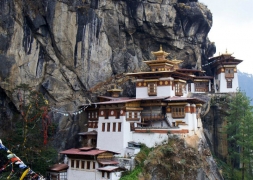