Mount Churen Mountain is among the seventh series' mountain in the Dhalwalagiri mountain range. It has three pinnacles, which are called; Churen west 7371m, Churen central 7375m and Churen north 7371m; and among which the central is remembered to the chief one.
Routes: Kathmandu-Pokhara-Baglung and Beni by bus. And after Beni, with the help of porters, it takes 5days to reach at its base camp. On the way, there are Dhorpatan, Takum, Lumsung and the last village is Gurja.
Beyond Gurja, there are no any villages. After Guru village by walking up steep on the wood way, we reach Burjungkharka via Darsingkharka; where we can establish our tent for the night haltage. From there, following along the river side of Kapekhola, we reach in the base camp in four hrs. Its base camp is located at 4800m high.
Its base camp and the Gurja Mountain's base camp are at the same height. From this base camp, the Churen Himal's base camp-1 and its pinnacle can be clearly visible. To climb Churen himal it's not so easy; and we should fix two high camps to reach there. In its east, the Dhaulagiri 1, 2, 3, 4, and 5 are located. And the Putha Himal is in its west. This mountain can be climbed through the south west ridge; and the best season is April - May & October & November every year.
Entry/Exit Beni 06 Oct. 2012 / 11 Apr. 2012 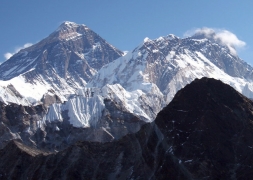