Singu Chuli (6,501m) was formerly known as the 'Flute Peak'. The first ascent of this peak was made by Wilf Noyce and David Cox on its North–East Face and the top section of the East Ridge.

Singu Chuli lies to the North of Tharpu Chuli along a connecting ridge. This mountain is a much stiffer proposition than Tharpu Chuli, and is the highest of all the trekking peaks in the area. There are no straight forward routes up the mountain. This trek is strongly recommended for real upfront excellent mountain views. You will enjoy the great cultural diversity in Ghandruk-Chhomorong and Ghorepani. Before entering the Fish Tail (Machhapuchhare Base Camp) and Annapurna Base Camp, you can relax for a while and enjoy the panoramic views of the world's highest mountains. Attempting this peak is thrilling adventure to its core.
Day 01: Drive from Kathmandu to Pokhara (914m.) which takes about six hours.

Day 05: Trek from Tadapani (2675m.) to Ghandruk (1950m.) which takes about three hours. It’s a cool and easy trek by descending gently all the way through rhododendron, oak and other kinds of dense forests. You could hear different kinds of birds chirping on the way. This is one of the popular destinations for the birds' lovers

Day 06: Trek from Ghandruk to Chhomrong (2040 m.) which takes approximately four hours. At the beginning of the day, you could ascend gently for an hour up to Ghandrukkot (2100m.) and descend steeply to the Kimron Khola (1700m.). Immediately, ascend steeply and walk at a level for an hour and still ascend gently to the final camp. Chhumrung is a gateway to Annapurna Sanctuary trek and inhabited by Gurungs, one of the major ethnic groups of Nepal.

Day 07: Trek from Chhomrong to Bamboo (2340m.) which it takes about five hours. Leaving Chhomrong, the trail descends on a stone staircase and crosses the Chhomrong Khola on a swaying suspension bridge, then climbs out of the side valley. High above the Modi Khola on its west bank, the trail passes through the tiny settlement of Tilicho in forests of bamboo, rhododendron and oak.

Day 08: Trek from Bamboo to Deurali (3230m.) which takes about five hours. You trek gently ascending through bamboo forests with varieties of rhododendron and oak trees. The first town you reach is Dovan (2630m.) where there are few lodges and camp sites. Now, you pass through a muddy trail which traverses high above the river. Debris from avalanches are seen here but not much during winter season. After a short trek, you reach at Himalayan Hotel (2900m.), the town named after the Himalayan Hotel. Beyond it, the trail is steeply ascent up to Hinko Cave (3160m.), which s named after as a huge overhanging rock provides some protection against rain and avalanches. It takes approximately twenty minutes through normally ascent path to reach Deorali (3230m.)

Day 09: Trek from Deurali to Annapurna Base Camp (4170 m.) via Machhapuchhare Base Camp (3820m.) which takes about four hours. From here, the valley widens and becomes less steep and you can see the gates to the sanctuary. The trail is less steep. As the trail continues into the sanctuary, it crosses two avalanche tracks on a narrow trail that hurdles up against the cliffs. After a short trek you will be at Bagar (3310m.), a meadow and some abandoned hotels. The normal trail follows the left side of the valley. Now, the trail appears gently ascending until you reach Machhapuchhare Base Camp (3820m.). Here,you find almost 6 to 7 lodges. This is one of the places where you can enjoy the view of Mount Hiunchuli (6441m.), Annapurna South (7229m.), Annapurna I (8091m.), Annapurna III (7555m.), Gangapurna (7454m.) and Machhapuchhare or Fish Tail (6997m.). The path follows through alpine meadows and after some distance your trail goes gently up. After a short trek, you begin to approach Annapurna Base Camp (4170m.). From here, you can view several peaks at 360 degree.

Day 10: Rest at Annapurna Base Camp (4,100). This is an acclimatization day for preparation of the summit.

Day 13: Rest at Ten Peak High Camp. This is an acclimatization day for the preparation of Singu Chuli summit.

Day 19: Trek from Macchapucchre Base Camp to Sinuwa, which is about six hours. The trail moves downhill until you reach Bamboo. After Bamboo, the trail goes steeply up to the Kuldi Ghar and now the trail is quite flat until you reach Sinuwa. There are a few tea houses at Sinuwa.

Day 20: Trek from Sinuwa to Jhinudanda (1750m.) which takes about four hours.
You trek gradually, descending to the Chhomrong Khola and you have to follow a stone staircase for almost an hour to reach Chhomrong. The last part of the trail goes steeply down to Jhinudanda. From the town you should walk down for 20 minutes to reach Hot Spring at the bank of the Modi Khola. You can then relax at the Hot Spring.

Day 21: Trek from Jhinudanda to Pothana (1600m.) which takes about five hours. The first part of the trek is a descent and then appears through flat land until you reach Himal Pani. Here, you find a beautiful waterfall. Beyond this town, the trail ascends gently crossing numerous streams and terraces. After a short trek, you will be at Landruk (1640m.), a pretty big village inhabited by mixed community of Gurung, Magar and Brahmins as well. Now, the trail gently ascends to Tolka (1850m.) and then ascends a level path to Bherikharka. From here, the trail goes steeply up to Deorali (2100m.) with a view of different mountain peaks in panorama. Now the trail gradually descends to Pothana passing through different oak forests. Pothana is a small town resided by Gurung, a ethnic community of Nepal. From here too, you can enjoy the splendid views of various mountain peaks. 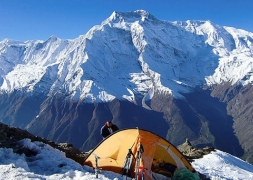