The shortest recommended Tibet tour; this shows you the major landmarks and points of interest in and around Lhasa. You take the spectacular flight from Kathmandu over Mt. Everest & the Himalaya to Lhasa. The next three days are spent exploring the shrines and landmarks of the Holy City and monasteries in the vicinity. The 17th century Potala dominates Lhasa and is now a museum housing priceless treasures. You will find the Tibetan spirit alive and well at the pilgrimage circuit of Barkhor around the Jokhang, the holiest of Tibetan shrines. The quantity of offerings at Norbu
Lingka, the summer palace of the Dalai Lamas, bears testimonial to the powerful belief of the Tibetan people in their religious and spiritual leader. You visit Sera and Drepung, two of the four great monasteries of the Gelugpa (Yellow hat) sect of Tibetan Buddhism, that flourished until recently; small numbers of monks now live in them. This is a superb introduction to the religious and cultural heritage of Tibet.
Day 01: Depart from Katmandu by air to Lhasa. Arrival at Gonggar Airport. Transfer to a hotel in Lhasa (2hrs). Time    at leisure. Overnight Lhasa.
Day 02: A full day sightseeing. Visit the Potala Palace; The residence of Dalai Lama; the Jokhang Lhakhang and stroll   around the market area. O/n Lhasa
Day 03: Visit the Drepung Monastery, the largest monastery in Tibet. This 14th. Century monastery once housed more than 10,000 monks. Later on visit the Norbulingpa Park, the summer Palace of the Dalai Lama.
Day 04: Drive to the Sera Monastery, the second largest in Tibet. This yellow sect monastery was very important,         politically, during the days of Dalai Lama. And afternoon visit to Buddhist Nunnery.
Day 05: Early morning drive to the airport for departure to Katmandu by flight.
For more Details & price please contact us at: info@himalayaguide.com or tandisherpa@hotmail.com
Book Now Inquiry Go to Home 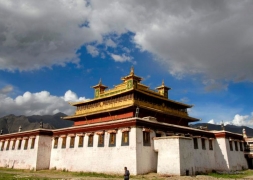