Ba-Yul, the hidden land of Dolpo, was first settled by Rokpa farmers and Drokpa nomads from Tibet in the 10th century. It is one of the highest inhabited places on earth, with scattered fortress-like villages and monasteries nestling amongst mountains of stark, ascetic beauty. Though part of Nepal today, Dolpo remains culturally and economically firmly tied to Tibet, the people of this desolate area are cut of from their southern neighbours by snow-covered passes for much of the year. This is fascinating and difficult country to travel in.Peter Matthiessen's The snow leopard and David Snellgrove's Himalayan Pilgrimage have contributed to the mystique and attraction of Dolpo. Both writers visited the Shey Gompa, to the north of the Phoksumdo lake, in inner Dolpo. This is the goal of most trekkers but this Dolpo trek will take you even further into this mysterious land…Dolpo is Bon-pro country, where people practice a shamanistic religion predating Tibetan Buddhism.
Much of Bon-po symbolism is the opposite of Buddhist practice. You should walk to the right of ancient mud chortens, which are inscribed with swastikas with their arms pointing in the opposite direction to the Buddhist chant of "om mani padme hum", the Bon-pos chant 'om ma tri mu ye sa le du", in Tibetan means "in clarity unite'.
Phoksumdo Lake
The lake is spectacular, it is 4.8km long, 1.8km wide and said to be 650m deep. It is known for its aquamarine color a greenish blue similar to a special Tibetan turquoise .There is no aquatic life in the lake, which helps to make the waters brilliantly clear. If you toss a rock in, you can watch it for a long time as it sinks to the bottom. According to legend, Phoksumdo Lake was formed by a spiteful female demon
In Buddhist Himalaya, David Snellgrove recounts how the demon was fleeing from the saint Padmasambhava and gave the village people a turquoise after they promised not to tell that she had passed by. Padmasambhava turned the turquoise into a lump of dung, which upset the local people so much they revealed the demon's whereabouts. She, in return caused a flood. It is said you can see the remains of a village below the lake's surface.
Day 01:Arrive Kathmandu

Day 28:Depart Kathmandu
Most of Dolpa is protected by Shey Phoksumdo National Park. It is bounded in the east and south by Dhaulagiri and Churen Himal ranges and in the west by the Jumla district. Dolpo has been bypassed by development and until recently by tourism. Although a few Anthropologists and geographers had explored the region, the entire district was closed of to foreigners until 1989, when southern parts of Dolpo was opened to organised trekking groups.

For more Details and Best price please contact us at: info@himalayaguide.com or tandisherpa@hotmail.com 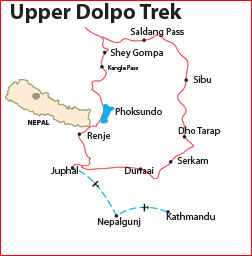